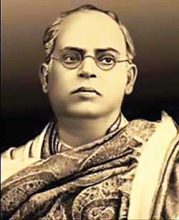 Dwijendralal Roy, also known as D.L. Roy was well known for writing over 500 Nationalist plays and songs. Coming from a well-off family, in contrast to Rajanikanta Sen,

Dwijendralal studied in England with a scholarship, published letters in India, Bangladesh and England. When he returned to Bengal, he was appointed as a Deputy Magistrate in 1886 and worked in the Departments of Survey and Settlement, Excise, Land Records and Agriculture, Administration and Judiciary.

He wrote several songs to influence people in the cultural movement of reuniting the two new provinces following the Bengal Partition in 1905. In a very light-hearted manner, he used his music to expose unfairness and discrimination against different castes and women during those times of change.

One of his well known songs “Dhana Dhanya Pushpa Bhara”was a contender for the national anthem of Bangladesh. However, this was not the case as Tagore’s “Amar Shonar Bangla” [My Bengal made of Gold] was the chosen anthem.

[Blessed with wealth, adorned with flowers
This Mother Earth of ours ...]