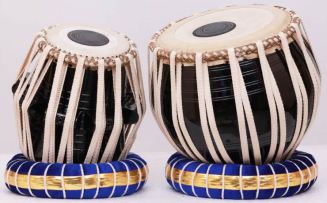 ﻿The tabla is a percussion instrument (effectively a drum) used predominantly in Indian classical music and even in some other Asian subcontinents such as Indonesia.

These are played in pairs, the right tabla is round and larger and gives a heavier sound when played while the one on the left is smaller and narrower and supports the larger tabla. They are played using the fingers and palms in numerous different ways to play different taals (rhythms) which vary with every song in Indian classical music.﻿﻿﻿﻿ ﻿

The heel of the hand, when used in a sliding motion on the larger tabla is used to create pressure, affecting the pitch of the resulting sound played.