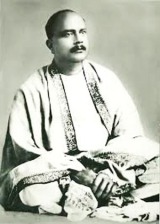 Atulprasad was one of Rabindranath Tagore’s few close friends, although he was almost ten years younger than Tagore.

A qualified lawyer, qualified in Kolkata, India, Atulprasad was actually born in Dhaka, Bangladesh, where he was raised by his grandfather from his mother’s side.

Atulprasad was introduced to the world of music due to his grandfather.

The introduction of "Thumri” in Bengali music was due to Atulprasad who also composed around a dozen Ghazals and over 200 songs based on three key subject matters: