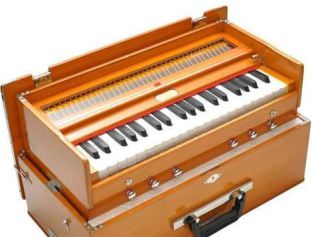 Originating from Europe, the Harmonium is now the most popular accompanying instrument in Indian Classical Music since the British introduced them to India.

This will be used in conjunction with your singing lessons at Raagini in order to train your voice on key notes.

1. Key Board: this is very similar to a piano, with each key producing a unique sound (note) when pressed in conjunction with the Bellows (see below).

2. Bellows: this is used as a pump to allow air to flow into the harmonium so that the keys produce sound when they are pressed. Right handed players tend to use their left hand to pump air into the instrument, while playing the keys with their right hand. The opposite applies to those who are left handed.

3. Coupler: this is a feature that is not in all harmoniums. When a key is played and the coupler knob has not been pulled out, the same key on another octave will be played simultaneously, allowing a fuller sound effect.

4. Stops: some harmoniums have these to control the direction of air flow in the harmonium. If no stops are pulled out, then there won't be any sound. ﻿﻿

5. Scale changer: this allows you to play the same keys on different scales and octaves, changing the pitch of the sounds being produced. This is a particularly useful feature that can be adapted to you voice when taking classical music training - to match deeper or higher pitched voices.